View cart “Hot from Harlem” has been added to your cart.

From the early days of minstrelsy to Black Broadway, this book is the story of African American entertainment as seen through the eyes of some of its most famous as well as others of its practitioners. The book moves from the beginning of African American participation in show business up through the present age. Will Marion Cook and Billy McClain are discovered in action at the very dawn of black parity in the entertainment field; six chapters later, the young Sammy Davis, Jr., breaks through the invisible ceiling that has kept those before him “in their place.” In between, the likes of Valaida Snow, Nora Holt, Billy Strayhorn, Hazel Scott, Dinah Washington, and others are found making contributions to the fight against racism both in and out of “the business.”

Bill Reed is a journalist and writer whose articles on show business, the arts and popular music have appeared in such publications as Rolling Stone, the San Francisco Examiner and International Documentary. He is a record producer of jazz recordings for SSJ Records (Japan).

Part One: The Big Picture

“large amount of research”—In The Groove. 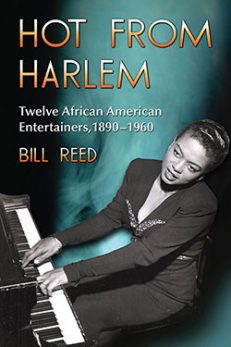