View cart “The Twilight Mystique” has been added to your cart.

Critical Essays on the Novels and Films

The 13 essays in this volume explore Stephenie Meyer’s wildly popular Twilight series in the contexts of literature, religion, fairy tales, film, and the gothic. Several examine Meyer’s emphasis on abstinence, considering how, why, and if the author’s Mormon faith has influenced the series’ worldview. Others look at fan involvement in the Twilight world, focusing on how the series’ avid following has led to an economic transformation in Forks, Washington, the real town where the fictional series is set. Other topics include Meyer’s use of Quileute shape-shifting legends, Twilight’s literary heritage and its frequent references to classic works of literature, and the series’ controversial depictions of femininity.

Amy M. Clarke is a continuing lecturer in the University Writing Program at the University of California, Davis. She teaches courses in science fiction and fantasy, including seminars on both the Harry Potter and Twilight series, and has recently published a study of Ursula Le Guin.
Marijane Osborn is professor emeritus of English at the University of California, Davis. She has written or been a major contributor to several books on Beowulf and has published three books on Middle English topics.

Luminous and Liminal: Why Edward Shines

Eco-Gothics for the Twenty-First Century

Bella and the Choice Made in Eden

Bella and Boundaries, Crossed and Redeployed

Forks, Washington: From Farms to Forests to Fans

The Pleasures of Adapting: Reading, Viewing, Logging On

“academics…discuss how author Stephenie Meyer uses various traditions in new ways, refers to earlier works of literature, and promotes abstinence. How the novels relate to the Gothic and Quilete traditions and Mormonism and whether the main character is a role model for girls are also examined. Other essays address whether Meyer follows vampire lore and tradition, the impact of fan activity on the setting’s town of Forks, Washington, and fan fiction”—Reference & Research Book News; “a fascinating book…informative and elegant…thought-provoking”—Margaret W. Ferguson, editor, The Norton Anthology of Poetry. 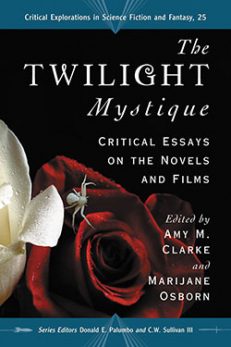 You're viewing: The Twilight Mystique $29.95
Add to cart