The Control of Childbirth

Women Versus Medicine Through the Ages

When childbirth moved from women’s homes into hospitals, women lost more than they had bargained for. As the event became increasingly male-dominated and medically oriented, women’s control of the experience all but vanished. Worse, recent clinical trials have demonstrated that most modern interventions and technological practices have not improved delivery outcomes and are not necessary in normal labor and birth. From pre-classical to present times, this work describes childbirth practices as they have developed through the ages. The author describes and critiques the evolution of modern midwifery and obstetrics, focusing especially on how, why, and when the process of childbirth became an increasingly sterile, male-dominated, and medically oriented event. Each chapter focuses on a different period, from the age of the female midwife (who oversaw the childbirth process for several centuries), through the origins of modern obstetrics and gynecology, and finally, to the increasing influence of technology in the practices that have prevailed for most of the twentieth and twenty-first centuries.

Phyllis L. Brodsky has been a nurse, hospital clinical educator, and university instructor. Also the author of articles and chapters in journals and manuals, she lives in Berlin, Maryland.

4. The Seventeenth Century: Men and Their Instruments      44

8. Nineteenth-Century America: The Birth of Obstetrics and Gynecology      97

10. The Second Half of the Twentieth Century: Technology-Managed Childbirth, By Edna Quinn      137 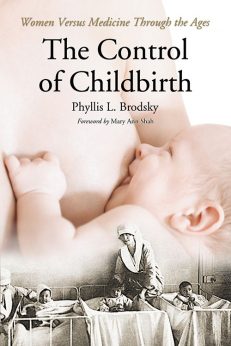 You're viewing: The Control of Childbirth $29.95
Add to cart