Women and the Olympic Dream

On an April morning in 1896, unemployed single mother Stamata Revithi ran the 40 kilometers from Marathon to Athens, finishing in 5 hours 30 minutes. Barred from the first Olympic marathon, she was determined to prove herself. Through more than a century of Olympic Games history, women athletes—who were held back from swimming because long skirts were required, limited to running single-lap races because of fallacies about fragility, or forced to endure invasive gender exams—competed in spite of endless challenges. From Athens 1896 to Tokyo 2020, this history of women’s participation in the Olympic Games centers on athletes who overcame entrenched inequity to gain inclusion. Instructors considering this book for use in a course may request an examination copy here.

Maria Kaj is a blogger and the author of multiple books about the Olympic Games. She lives in northern California.

• “Maria Kaj’s lively, engaging, and humorous writing style brings to life the richness of women’s Olympic history. With every stride, stroke, and shot women made history on sports’ global stage and Women and the Olympic Dream shines a much-needed light on their achievements. A must read for anyone interested in women’s important place in the Olympics’ past and its present.”—Dr. Rita Liberti, professor of Sport History, Department of Kinesiology, California State University, East Bay

• “Continuing struggle indeed: Maria Kaj gets us ready for athletic competition and then races us through the many decades and decisions that have followed female Olympians since they were ‘allowed’ to compete, recording their agonies and accomplishments in a free-ranging style that underscores the value of women’s sports.”—Linda K. Fuller, author of Female Olympians: A Mediated Socio-Cultural and Political-Economic Timeline 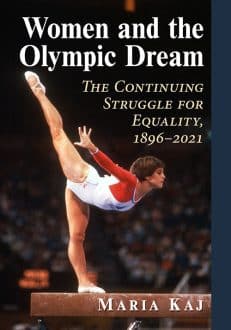 You're viewing: Women and the Olympic Dream $39.95
Add to cart