Soup Through the Ages

A Culinary History with Period Recipes

As cooking advanced from simply placing wild grains, seeds, or meat in or near a fire to following some vague notion of food as a pleasing experience, soup—the world’s first prepared dish—became the unpretentious comfort food for all of civilization.
This book provides a comprehensive and worldwide culinary history of soup from ancient times. Appendices detail vegetables and herbs used in centuries-old soup traditions and offer dozens of recipes from the medieval era through World War II.

Victoria R. Rumble is a regular contributor of articles on 18th and 19th century material culture to Citizen’s Companion and The Civil War Courier as well as freelancing and providing research for additional magazines such as Early American Life. She has researched and implemented historical programs at various historical sites and national parks throughout the southeast United States. She works as a consultant on historical interpretation, demonstrates historical foodways, and teaches open hearth cooking. She lives in Wetumpka, Alabama.

PART ONE : THE OLD WORLD

“a culinary smorgasbord of historical soups”—C&RL News; “Massive amount of research…a solid contribution to culinary history!”—Andrew F. Smith, editor in chief, The Oxford Companion to American Food and Drink; “Rumble…proves she is a consummate researcher and an entertaining writer. Her works possess a quality so lacking in may historical tomes of today; the ability to impart knowledge while making it an enjoyable read in the process! For those of you who thought soup was nothing but a can of Campbell’s and a little water or a couple of bouillon cubes, get your taste buds ready for a delight. This book proves that history and good tasting food are not mutually exclusive!”—Steve Abolt, President 7th US Infantry Living History Association Military Historian and Historian Film Consultant; “Victoria Rumble has written a book that is rich with flavor and with history. The worldwide references, the foodways, and the recipes create a book that will inform every bowl of soup that you prepare—or eat! It is a book that belongs on the bookshelves of all historians. The development of soup is the development of civilization.”—Elizabeth M. Williams, President Southern Food and Beverage Museum. 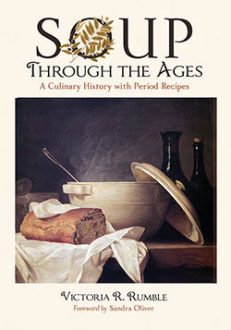