An Introduction to Medieval Literature

Medieval literature is separated from us by so many centuries that it may seem completely foreign, both in its concerns and its techniques. However, this literature has much to say to 21st century readers and Steinberg’s book demonstrates its continuing relevance and appeal.
This introduction to medieval literature provides some of the cultural context that readers need to know in order to understand the literature, such as the religious orientation of the people, often deep and sincere but sometimes treated casually or subjected to intense scrutiny. The first chapter provides a brief explanation of medieval religious thought, cosmology and intellectual history. The remaining chapters provide introductions to a number of individual works ranging from Beowulf to the works of Chaucer. Avoiding the tendency to regard the Middle Ages as an era dominated by Christian men, these discussions include works by women writers and Jewish writers and a chapter on the medieval Japanese masterpiece The Tale of Genji.
Instructors considering this book for use in a course may request an examination copy here.

Theodore L. Steinberg is a retired professor from the State University of New York at Fredonia, where he taught courses in biblical, medieval and Renaissance literatures. He has published books on the Yiddish writer Mendele Mocher Seforim and on the 14th century poem Piers Plowman. Steinberg has been awarded the President’s Award for Excellence in Teaching as well as the Chancellor’s Award for Excellence in Teaching. He lives in Buffalo, New York.

IV. THE ROMANCE OF THE ROSE

V. THE TALE OF GENJI

IX. PEARL AND SIR GAWAIN AND THE GREEN KNIGHT 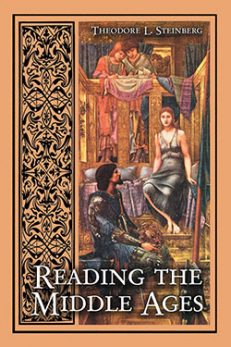 You're viewing: Reading the Middle Ages $19.99
Add to cart