View cart “Disputed Ground” has been added to your cart.

Farmers suffering the effects of drought and depression in the 1930s were looking for relief from what they felt were unfair prices for their crops, and reform of the entire agricultural and economic system of which they were the primary part. In the election campaign of 1932, they heard Franklin D. Roosevelt promise that if elected he would work for a program to help them. The vagueness of the president-to-be led a variety of farm groups to believe that he would support their leaders and programs, but some groups, such as the Farmers Union, were disappointed and their organizers criticized various aspects of the New Deal Agricultural Program. During the dire thirties, new farm groups were formed to voice their opposition to the program. The ideas of these groups were resisted by the Department of Agriculture, which fought back to stifle their opposition and largely won. This work is a history of seven organizations that opposed Roosevelt’s agricultural programs. They are the Missouri Farmers Association, the Farmers Union, the Farm Holiday Movement, the Farmers Independence Council, the National Farmers Process Tax Recovery Association, the Corn Belt Liberty League and the Farmers Guild.

Jean Choate teaches history at the College of Coastal Georgia. She has written two previous books, one on farmers during the Depression, the other on Eliza Johnson, the wife of President Andrew Johnson. She lives in Brunswick, Georgia.

“well-illustrated study…recommended”—Choice; “the book is well written, the scholarship is outstanding, and the study helps us to better understand the early years of the New Deal”—The Annals of Iowa 62; “interesting…important”—The New Farm; “performs a real service”—The Journal of American History. 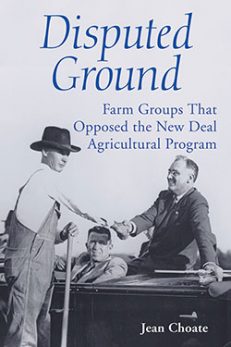