Any on-screen schmuck can take down a wolfman with a silver bullet. It takes a certain kind of hero to hoist that wolfman overhead into an airplane spin, follow with a body slam, drop an atomic elbow across his mangy neck, leg-lock him until he howls, and pin his furry back to the mat for a three-count. It takes a Mexican masked wrestler. Add a few half-naked vampire women, Aztec mummies, mad scientists, evil midgets from space, and a goateed Frankenstein monster, and you have just some of the elements of Mexican masked wrestler and monster movies, certainly among the most bizarre, surreal and imaginative films ever produced.

This filmography features some of the oddest cinematic showdowns ever concocted—Mexican masked wrestlers battling monsters, evil geniuses and other ne’er-do-wells, be it in caves, cobwebbed castles or in the ring. From the 1950s to the 1970s, these movies were staples of Mexican cinema, combining action, horror, sex, science fiction and comedy into a bizarre amalgam aimed to please the whole family. Chapters examine the roots of the phenomenon, including the hugely popular masked wrestling scene and the classic Universal horror films from which Mexican filmmakers stole without compunction. Subsequent chapters focus on El Santo, Blue Demon, and Mil Mascaras, the three most prominent masked wrestlers; wrestling women; other less prominent masked wrestlers; and the insane mish-mash of monsters pitted against the heroes. Each chapter includes background information and a full filmography, and a wide assortment of striking illustrations—posters, lobby cards and other graphic material, some better than the movies they advertised—accompany the text. 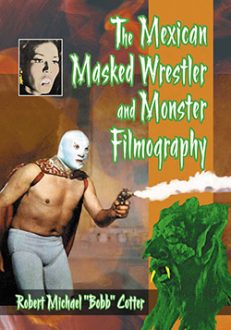 You're viewing: The Mexican Masked Wrestler and Monster Filmography $25.00
Add to cart