A History; A New Edition

In the Blue Ridge Mountains of northwestern North Carolina, along the Virginia and Tennessee borders, sits rural, mountainous Ashe County. When an act of the North Carolina General Assembly created Ashe in 1799, the county had previously been claimed by four other counties, the short-lived State of Franklin, and even France, based on treaty claims that the New River drained into the Mississippi.
This work is a reprint of the first-ever complete history of the county, originally commissioned by the Ashe County Research Association, written by Arthur Lloyd Fletcher and published in 1963. Chapters cover early explorers, the ill-fated War of Regulation, the county’s creation in 1799, the county’s role in the Civil War and both World Wars, religion, education, industry, community leaders and newspapers, recreation, and folklore, among other topics. 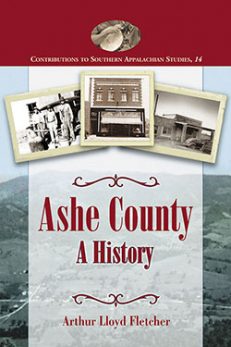