View cart “Working While Black” has been added to your cart.

In recent years, there has been a rise in diverse racial representation on television. In particular, Black characters have become more actualized and have started extending beyond racial stereotypes. In this collection of essays, the representation of Black characters in professionally defined careers is examined. Commentary is also provided on the portrayal of Black people in relation to stereotypes alongside the importance of Black representation on screen. This work also introduces the idea of Black-collar, a category which highlights the Black experience in white-collar jobs. The essays are divided into six parts based on themes, including profession, and focuses on a select number of Black characters on TV since the 1990s.

LaToya T. Brackett is an assistant professor of African American studies, and a member of the Race & Pedagogy Institute’s leadership team at the University of Puget Sound. She lives in Tacoma, Washington. 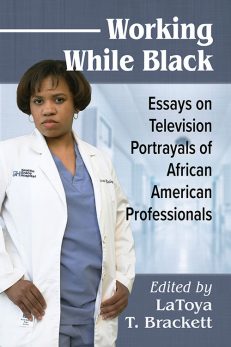 You're viewing: Working While Black $45.00
Add to cart