View cart “We Had to Get Out of That Place” has been added to your cart.

We Had to Get Out of That Place

A Memoir of Redemption and Betrayal in Vietnam

Steven Grzesik’s counter-culture experience in Greenwich Village ended with a bad acid trip followed by a draft notice. The Vietnam War, then at its height, seemed doomed to failure by cynical politicians and a skeptical public, a prediction he weighed against his sense of duty to himself and to his country. Through a variety of combat duties—with the infantry, the 36th Engineer Battalion, F Co. 75th Rangers and the 174th Assault Helicopter Co.—and several close calls with death, Grzesik’s detailed memoir recounts his two tours in-country, where he hoped merely to survive with a semblance of heroism yet ultimately redefined himself.

Steven Grzesik served two tours of duty in Vietnam. He spent time in the infantry and the engineers on his first tour. On his second tour he volunteered for the original 75th Rangers, going on many long-range reconnaissance patrols. Afterwards, he flew as a door gunner in the largest air assault of the war: Operation Lam Son 719—the invasion of Laos. He has written for major newspapers and military periodicals. He lives in Seminole, Florida.

• “Steven Grzesik has pulled back the curtain on service in the Vietnam War. It was a brutal time and Steve honestly offers his experiences as proof of this.”—Major General Bradley Lott, United States Marine Corps (retired)

• “Grzesik’s gripping point of view places you squarely into his gritty, no-punches-pulled, journey of self-discovery. He takes you from the streets of New York City to the battlefields of Vietnam, and in doing so, reveals the insanity of that war, and the humanity of its soldiers.”—David Sheppard, Commander, United States Coast Guard

• “Grzesik captures the horrors of the Vietnam War. He details the fears of a young soldier being dropped into the unknown in Vietnam: a conflict no one could be prepared for. The account of his journey is riveting.”—Kurt Browning, former Florida Secretary of State 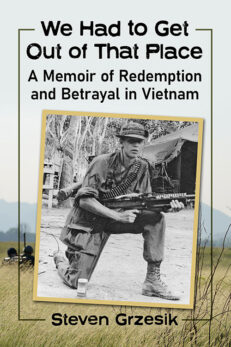