View cart “The Southern Textile Basketball Tournament” has been added to your cart.

In 1905 Lawrence Peter Hollis went to Springfield, Massachusetts, before beginning his job as the secretary of the YMCA at Monaghan Mill in Greenville, South Carolina. While there, he met James Naismith, the inventor of basketball, and learned of the fledgling game. Armed with Dr. Naismith’s rules of the game and a basketball he bought in New York, Hollis returned to the mill and changed the face of athletics in South Carolina.
Lawrence Peter Hollis was one of the first to introduce basketball south of the Mason-Dixon line, and the game quickly gained popularity in the textile mill villages throughout South Carolina. In 1921 Hollis and others organized a tournament to determine the best mill team, and thus the southern Textile Basketball Tournament was born. Over the years, some of the south’s top cage talent played in the tourney, including “Smokey” Barbare, Lucille Foster Thomas, Bert Hill, Earl Wooten, Billy Cunningham, Pete Maravich, Sue Vickers and Tree Rollins. Decade-by-decade, the history of one of the longest running basketball tournaments is provided, along with profiles of many prominent participants. Full rosters for all teams in all tournaments are given in the appendices, along with all-tournament selections and members of the Southern Textile Athletic Hall of Fame.

Mac C. Kirkpatrick of Greenwood, South Carolina, is an industrial engineer in the textile industry.
Thomas K. Perry is the author of Textile League Baseball (1993). He lives in Newberry, South Carolina.

“profiles of many prominent participants, rosters for all teams, all-tournament selections, members of the Southern Textile Athletic Hall of Fame and other data”—Reference & Research Book News. 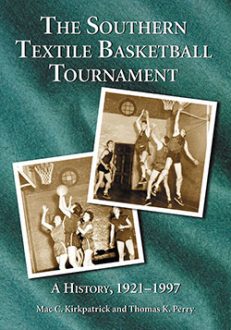 You're viewing: The Southern Textile Basketball Tournament $39.95
Add to cart