The Salvadoran Officer Corps and the Final Offensive of 1981

The “final offensive,” an insurgent campaign fought after El Salvador’s coup of 1979, clearly demonstrated the strengths, weaknesses, idiosyncrasies, and behavior of the Salvadoran officer corps. During this crucial period, the military institution faced the double threat of internal politics and a rebel guerrilla army.
Colonel Bosch served as the U.S. Embassy’s Defense and Army Attaché during the crisis. His intimate perspective brings to life the important political and military events before, during and after the final offensive. His book also offers an historical perspective of officer attitudes from 1931 to 1979. The Armed Forces political crisis of 1979 and 1980 is discussed, followed by a detailed analysis of the final offensive, the short-lived cohesiveness shown by the officer corps and the divisiveness that lasted through the war and into peace. The text is complemented by a map and photographs.

Brian J. Bosch, Colonel, United States Army, retired, spent most of his service in military intelligence. Before El Salvador, in 1970–1974 he was the U.S. Embassy’s Defense Attaché in the Dominican Republic. He held a Latin American position in the Pentagon, and was military attaché operations chief for Latin America. Now living in Chevy Chase, Maryland, he has written for professional and academic journals on political and military affairs. 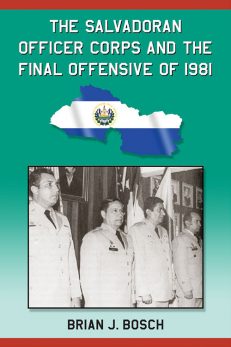 You're viewing: The Salvadoran Officer Corps and the Final Offensive of 1981 $25.00
Add to cart