View cart “The Man Who Made Babe Ruth” has been added to your cart.

The Man Who Made Babe Ruth

At six-feet-six, the hulking Martin Leo Boutilier (1872–1944) was hard to miss. Yet the many books written about Babe Ruth relegate the soft-spoken teacher and coach to the shadows. Ruth credited Boutilier—known as Brother Matthias in the Congregation of St. Francis Xavier—with making him the man and the baseball player he became. Matthias saw something in the troubled seven-year old and nurtured his athletic ability. Spending many extra hours on the ballfield with him over a dozen years, he taught Ruth how to hit and converted the young left-handed catcher into a formidable pitcher. Overshadowed by a fellow Xavierian brother who was given the credit for discovering the baseball prodigy, Matthias never received his due from the public but didn’t complain. Ruth never forgot the father figure who continued to provide valuable counsel in later life. This is the first telling of the full story of the man who gave the world its most famous baseball star.

Award-winning journalist Brian Martin lives in London, Ontario. He is a member of the selection committee of the Canadian Baseball Hall of Fame and the Society for American Baseball Research.

• “Martin’s wonderful book has brought an important story to the surface. We may not know where Babe Ruth’s baseballs are in Lake Ontario, but we know a great deal more about the unlikely Canadian hero who helped him become one of the greatest players the game has ever seen.”—Literary Review of Canada

• “In Martin’s page-turner, we learn that not only did the hulking 6-foot-6 prefect of discipline and director of all physical activity at St. Mary’s Industrial Training School in Baltimore help shape Ruth mentally–instilling in him much-needed values and beliefs–but he was also responsible for introducing The Babe to baseball and for influencing Ruth’s home run swing…. This is another outstanding effort by Martin, who’s already one of Canada’s top baseball writers and historians.”—Kevin Glew, Coopertowners in Canada blog

• “While the rags-to-riches story of Babe Ruth has been told in scores of books, this is the first to uncover the compelling story of the father figure in his life–Brother Matthias, C.F.X. The author’s meticulous and thorough research of the Xaverian Brothers, St. Mary’s Industrial School and Brother Matthias is apparent on every page.”—Harry Rothgerber, editor, Young Babe Ruth: His Early Life and Baseball Career, from the Memoirs of a Xaverian Brother 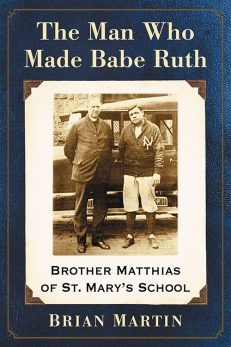