Essays on the Later Works

As Stephen King has continued to publish numerous works beyond one of the many high points of his career, in the 1980s, scholarship has not always kept up with his output. This volume presents 13 essays (12 brand new) on many of King’s recent writings that have not received the critical attention of his earlier works. This collection is grouped into three categories—“King in the World Around Us,” “Spotlight on The Dark Tower” and “Writing into the Millennium”; each examines an aspect of King’s contemporary canon that has yet to be analyzed.

Patrick McAleer co-chairs the Stephen King Area of the Popular Culture Association. He has published many articles on King and teaches English at Inver Hills Community College in the Twin Cities, Minnesota.

Michael A. Perry is an associate professor of English at Rockford University in Illinois. He has presented papers connecting Stephen King to Toni Morrison, Mark Twain and Ambrose Bierce.

Edited by Patrick McAleer and Michael A. Perry

Acknowledgments ix
Introduction: A More Subtle Macabre (Michael A. Perry and Patrick McAleer) 1
Part I. King in the World Around Us
Fantasy in Fiction: The ­Double-Edged Sword (Jennifer Jenkins) 10
King Me: Inviting New Perceptions and Purposes of the Popular and Horrific into the College Classroom (Michael A. Perry) 24
A Taste for the Public: Uncle Stevie’s Work for Entertainment Weekly (Scott Ash) 41
The World at Large, America in Particular: Cultural Fears and Societal Mayhem in King’s Fiction Since 1995 (Mary Findley) 56
Part II. Spotlight on The Dark Tower
Roland the Gunslinger’s Generic Transformation (Michele Braun) 66
“Childe Roland to the Dark Tower Came”: The Heroic Aspects of the Gunslinger (T. Gilchrist White) 81
Riddles Wrapped in Mystery Inside Enigmas: ­Anglo-Saxon Literature as the Key to Unlocking the Ending of The Dark Tower Series (Jennifer D. Loman) 93
A Rose, a Stone, an Unfound Door: Metaphor and Intertextuality in The Dark Tower Series (Georgianna O. Miller) 107
Part III. Writing into the Millennium
Survival of the Sweetest: Little Miss Bosox and the Saving Grace of Baseball in The Girl Who Loved Tom Gordon (Abigail L. Bowers and Lowell Mick White) 122
More Than Just Ghost Lore in a Bad Place: Mikael Håftröm’s Cinematographic Translation of 1408 (Alexandra Reuber) 136
“Born in Sin”: Millennial Anxiety in Storm of the Century (Philip L. Simpson) 150
The Fallen King(dom): Surviving Ruin and Decay from The Stand to Cell (Patrick McAleer) 168
“The Word Pool, Where We All Go Down to Drink”: The Irresistible Pull of Language in Lisey’s Story (Jennifer Alberico) 185
Bibliography 195
About the Contributors 205
Index 207

“Intriguing…engaging…McAleer and Perry have succeeded in paving the way for new scholarship on Stephen King’s modern writing. The editors should be commended in particular for complicating the outdated notion that King is primarily a horror writer.”—Journal of the Fantastic in the Arts 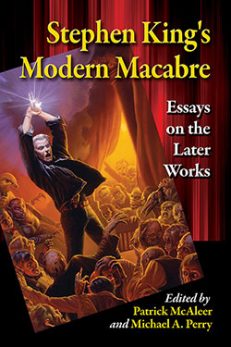