View cart “The Kaiju Film” has been added to your cart.

The Kaiju (strange monster or strange beast) film genre has a number of themes that go well beyond the “big monsters stomping on cities” motif. Since the seminal King Kong 1933) and the archetypal Godzilla (1954), kaiju has mined the subject matter of science run amok, militarism, capitalism, colonialism, consumerism and pollution. This critical examination of kaiju considers the entirety of the genre—the major franchises, along with less well known films like Kronos (1957), Monsters (2010) and Pacific Rim (2013). The author examines how kaiju has crossed cultures from its original folkloric inspirations in both the U.S. and Japan and how the genre continues to reflect national values to audiences.

Jason Barr is an assistant professor at Blue Ridge Community College. His work has appeared in African American Review, Explicator, The Journal of Continuing Higher Education, and The Journal of Caribbean Literatures, among others. He lives in Harrisonburg, Virginia.

Introduction: A Genre Apart 4
Toward a New Definition 8
The Field of Study 18
Background on the Genre 21
The Impact on Cultures 22

4. Science and the Weapons of Mass Destruction 105
Science as Destroyer 106
The Japanese ­Self-Defense Forces 111 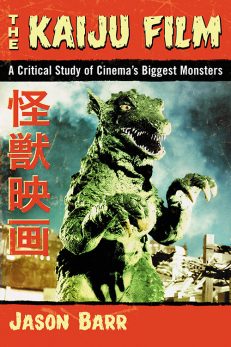