The Fighting Times of Abe Attell

Abraham Washington Attell (1883–1970) was among the cleverest, most scientific professional boxers ever to enter the ring. The native San Franciscan fought 172 times—with 127 wins, 51 by knockout—and successfully defended his World Featherweight Champion title 18 times between 1906 and 1912, defeating challengers who included Johnny Kilbane and Battling Nelson. Abe’s success inspired his brothers Caesar and Monte to take up the sport—Abe and Monte both held simultaneous world titles for a time.
This first ever biography covers Attell’s life and career. Growing up poor and Jewish in an predominantly Irish neighborhood, he faced his share of adversity and anti–Semitism. He was charged for alleged involvement in the 1919 Black Sox Scandal. The charges were dropped but Attell was branded for the remainder of his life.

Mark Allen Baker, business executive and writer of hundreds of articles and more than 25 books, is the only person to serve the International Boxing Hall of Fame as an author, historian, chairperson, sponsor, volunteer and biographer. He also serves on the Board of Directors of the Connecticut Boxing Hall of Fame. He was accorded a Lifetime Award of Merit by the State University of New York in 2022. 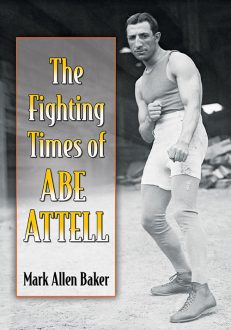 You're viewing: The Fighting Times of Abe Attell $39.95
Add to cart