View cart “Tail End Charlie” has been added to your cart.

Memoir of a United States Marine in the Vietnam War

This memoir is a record of what Jensen calls the luckiest and greatest adventure of his life. In the midst of the fighting and with the knowledge that each day could be his last, this young Marine managed to find some humor in his situation and he believes that is what kept him alive.
The story begins with Jensen as a young man in New York in the 1960s, who, following in his brother’s footsteps, decides to join the Marines in hopes of finding himself. Early chapters discuss his experiences in boot camp and his combat training at Camp Lejeune. Subsequent chapters move directly to vivid descriptions of action on the battlefield, Jensen’s time aboard the USS Valley Forge, days spent walking through rice paddies and the resulting foot infections he suffered. On the day he arrived home in New York, a cab driver at the airport charged Jensen double the fare to drive him home. He paid it and returned to a delighted family on March 6, 1970. 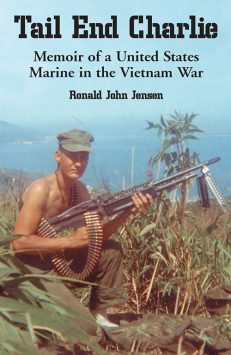