View cart “Sworn Bond in Tudor England” has been added to your cart.

Oaths, Vows and Covenants in Civil Life and Literature

The swearing of oaths is a cultural phenomenon that pervades English history and was remarkably important during the sixteenth century. This multi-disciplinary work explores how writers of the Tudor era addressed the subject in response to the profound changes of the Reformation and the creative explosion of the Elizabethan period. Topics include how the art of rhetoric was deployed in polemic, the way in which oaths formed bonds between Church and State, and how oaths functioned in literature, as ceremony and as a language England used to describe itself during times of radical change.

Thea Cervone lectures in medieval and renaissance literature at the University of Southern California. She has published on the ghost tradition of the sixteenth century and on propaganda plays of the Reformation.

1. Defiance by Prerogative: The Coronation Oath of Henry VIII      19

2. The Matter of Resources: Sworn Bond and Biblical Example in The Boke Named the Governour      38

3. Additions and Admissions: The Manipulation of Sworn Bond in the Henrician Fealty Oath      56

6. Oath, Obligation, and Obedience: Fealty and Service in Three Plays About King John      134

Appendix A. The French Version of the Anomalous Form of the Oath of Edward II      187

Appendix B. The Recantation of William Tolwyn, Recorded by Alexander Seton, and Reprinted by John Bale      188

“Cervone argues that oath-swearing is a central feature of Tudor thinking”—Reference & Research Book News; “of great value”—Archive for Reformation History. 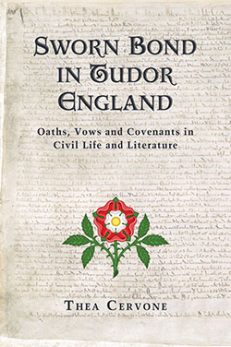 You're viewing: Sworn Bond in Tudor England $29.95
Add to cart