Suicide in the Entertainment Industry

An Encyclopedia of 840 Twentieth Century Cases

This work covers 840 intentional suicide cases initially reported in Daily Variety (the entertainment industry’s trade journal), but also drawing attention from mainstream news media. These cases are taken from the ranks of vaudeville, film, theatre, dance, music, literature (writers with direct connections to film), and other allied fields in the entertainment industry from 1905 through 2000. Accidentally self-inflicted deaths are omitted, except for a few controversial cases.
It includes the suicides of well-known personalities such as actress Peg Entwistle, who is the only person to ever commit suicide by jumping from the top of the Hollywood Sign, Marilyn Monroe and Dorothy Dandridge, who are believed to have overdosed on drugs, and Richard Farnsworth and Brian Keith, who shot themselves to end the misery of terminal cancer. Also mentioned, but in less detail, are the suicides of unknown and lesser-known members of the entertainment industry. Arranged alphabetically, each entry covers the person’s personal and professional background, method of suicide, and, in some instances, includes actual statements taken from the suicide note.

David K. Frasier is a reference librarian at the Lilly Library at Indiana University Bloomington. He is the author of several books. 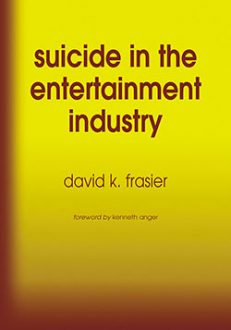 You're viewing: Suicide in the Entertainment Industry $49.95
Add to cart