View cart “Sowing the Seeds of Victory” has been added to your cart.

Sowing the Seeds of Victory

Sometimes, to move forward, we must look back. Gardening activity during American involvement in World War I (1917–1919) is vital to understanding current work in agriculture and food systems. The origins of the American Victory Gardens of World War II lie in the Liberty Garden program during World War I. This book examines the National War Garden Commission, the United States School Garden Army, and the Woman’s Land Army (which some women used to press for suffrage). The urgency of wartime mobilization enabled proponents to promote food production as a vital national security issue. The connection between the nation’s food readiness and national security resonated within the U.S., struggling to unite urban and rural interests, grappling with the challenges presented by millions of immigrants, and considering the country’s global role. The same message—that food production is vital to national security—can resonate today. These World War I programs resulted in a national gardening ethos that transformed the American food system.

Rose Hayden-Smith is an academic with the University of California, Agriculture and Natural Resources. A well-known gardening, food systems and sustainable agriculture advocate, she lives in Ventura, California.

Preface: Sowing the Seeds of Victory 1

One: The Garden Revolution 11

Two: In the Furrows of Freedom 32

Five: The Pennsylvania School of Horticulture for Women 121

Six: “Sisters of the Soil”: The Woman’s Land Army of America 143

Conclusion: Demobilization, the Trajectory of the Programs and Public Policy
Implications for Today 192 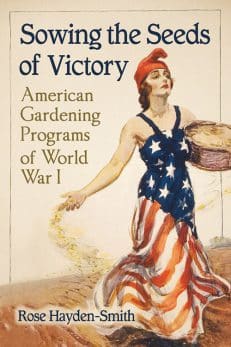 You're viewing: Sowing the Seeds of Victory $39.95
Add to cart