Essays on Trauma and Memory in the Whedonverse

The films, television shows, and graphic novel series that comprise the Whedonverse continually show that there is a high price to be paid for love, rebellion, heroism, anger, death, betrayal, friendship, and saving the world. This collection of essays reveals the ways in which the Whedonverse treats the trauma of ordinary life with similar gravitas as trauma created by the supernatural, illustrating how memories are lost, transformed, utilized, celebrated, revered, questioned, feared, and rebuffed within the storyworlds created by Joss Whedon and his collaborators.
Through a variety of approaches and examinations, the essays in this book seek to understand how the themes of trauma, memory, and identity enrich one another in the Whedonverse and beyond. As the authors present different arguments and focus on various texts, the essays work to build a mosaic of the trauma found in beloved works like Buffy the Vampire Slayer, Angel, Dollhouse, and more. The book concludes with a meta-analysis that explores the allegations of various traumas made against Joss Whedon himself.

Alyson R. Buckman is a professor in and former chair of the Humanities and Religious Studies Department at California State University, Sacramento. She has published on Alice Walker, Octavia Butler, The Gilmore Girls, Orphan Black, and the Whedonverse. Juliette C. Kitchens is an associate professor and the director of graduate studies in the Department of Communication, Media, and the Arts at Nova Southeastern University in Fort Lauderdale, Florida. Her published research includes identity studies, technology, and transmedia. Katherine A. Troyer is the director of The Collaborative for Learning and Teaching at Trinity University in San Antonio, Texas. In addition, she teaches, writes, and podcasts (as a co-host of Such a Nightmare) about all things horror. Sherry Ginn is a retired educator currently living in North Carolina. She has authored books examining female characters on science fiction television series as well as the multiple television worlds of Joss Whedon. Edited collections have examined sex in science fiction, time travel, the apocalypse, and the award-winning series Farscape, Doctor Who, and Fringe.

Acknowledgments v
Introduction: Welcome to the Hellmouth: Trauma and Memory in the Whedonverse
Katherine A. Troyer 1
“That has nothing to do with today”: The Whedonverse and the Dangers of Rewriting Historical Memory
Erin Giannini 21
Unwanted Memories: When Heroines Choose Trauma Over Amnesia
Valerie Estelle Frankel 43
Restless Death: Memory and Transmedial Bodies in the Buffyverse
Juliette C. Kitchens 62
Dismembering (the) Buffybot
Madeline Muntersbjorn 81
“Better”: Trauma, Romantic Attachment, and the Victor/Sierra Arc in Dollhouse
Renee St. Louis 99
“Now you don’t have to use this color anymore”: Art Therapy in Dollhouse and Orphan Black
Janet Brennan Croft 118
Such Pretty Things: Madness in the Whedonverse
Catherine Pugh 131
Conclusion: “We had our own hellmouth”: The Allegations Against Joss Whedon
Alyson R. Buckman 157
About the Contributors 181
Index 183

• “…elegantly grapples with the complexities of trauma and memory displayed through the Whedon cannon without allowing the critical discussion of the fictitious to overshadow the hauntingly real traumas surrounding Whedon’s influential, but controversial, legacy.”—Janna Harner, author of “Killing is for grown-ups”: The Spatial Performance of Trauma in Anthony Horowitz’s Alex Rider Series

• “The orientation of the collection—conceptions and invocations of trauma in particular—is a contemporary, burgeoning and multidisciplinary field, so this is a timely collection that reorientates a variety of Whedonverse texts via a series of innovative and productive discourses.”—Michael Starr, coeditor of Re-Entering the Dollhouse: Essays on the Joss Whedon Series 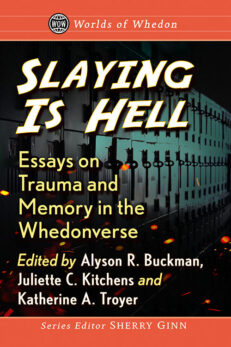