The African American History of America’s Most Hallowed Ground

From its origination, Arlington National Cemetery’s history has been compellingly intertwined with that of African Americans. This book explains how the grounds of Arlington House, formerly the home of Robert E. Lee and a plantation of the enslaved, became a military camp for Federal troops, a freedmen’s village and farm, and America’s most important burial ground. During the Civil War, the property served as a pauper’s cemetery for men too poor to be returned to their families, and some of the very first war dead to be buried there include over 1,500 men who served in the United States Colored Troops. More than 3,800 former slaves are interred in section 27, the property’s original cemetery.

Ric Murphy is an educator, historian, lecturer and award-winning author. He has served as board chair of several organizations and on numerous additional national and local not-for-profit boards. He lives in Virginia.

Historian Timothy Stephens is a national expert in public health and emergency preparedness. He has been a national public health leader and commentator for more than twenty years, and advises risk managers on emerging public health threats. He lives in Philadelphia, Pennsylvania. 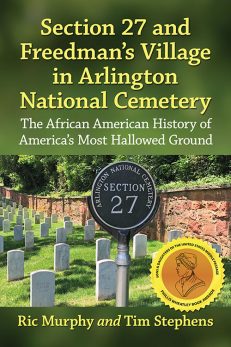 You're viewing: Section 27 and Freedman’s Village in Arlington National Cemetery $29.95
Add to cart