View cart “Secret Lives of the Underground Railroad in New York City” has been added to your cart.

Secret Lives of the Underground Railroad in New York City

Sydney Howard Gay, Louis Napoleon and the Record of Fugitives

During the fourteen years Sydney Howard Gay edited the American Anti-Slavery Society’s National Anti-Slavery Standard in New York City, he worked with some of the most important Underground agents in the eastern United States, including Thomas Garrett, William Still and James Miller McKim. Gay’s closest associate was Louis Napoleon, a free black man who played a major role in the James Kirk and Lemmon cases. For more than two years, Gay kept a record of the fugitives he and Napoleon aided. These never before published records are annotated in this book.
Revealing how Gay was drawn into the bitter division between Frederick Douglass and William Lloyd Garrison, the work exposes the private opinions that divided abolitionists. It describes the network of black and white men and women who were vital links in the extensive Underground Railroad, conclusively confirming a daily reality.

1—Sydney Howard Gay and the Cause 13

3—A Slave Hunt in the Shadow of City Hall 43

8—The Case That Made Louis Napoleon Famous 83

I. Fugitives Passing through Philadelphia 242

“Don Papson and Tom Calarco have opened for us a treasure trove, a first hand, first person, first rate exploration of the Underground Railroad in operation”—North Country Underground Railroad Historical Association; “This book is a must-have for researchers, genealogists, students, teachers, and general readers interested in this dramatic period in our nation’s history!”—Kate Larson, Bound For the Promised Land: Harriet Tubman, Portrait of an American Hero. 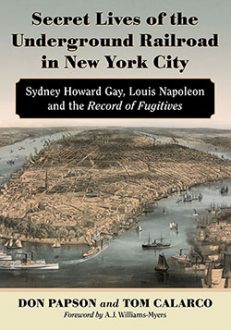 You're viewing: Secret Lives of the Underground Railroad in New York City $39.95
Add to cart