View cart “Secret Allies in the Pacific” has been added to your cart.

Secret Allies in the Pacific

Covert Intelligence and Code Breaking Cooperation Between the United States, Great Britain, and Other Nations Prior to the Attack on Pearl Harbor

Even though the United States was still officially at peace prior to the Japanese attack on Pearl Harbor, it was secretly devising a chain of intelligence-sharing alliances with future allies in the impending war in the Pacific. This work is divided into four sections, which bring together bits and pieces of often isolated details about the intelligence alliance, allowing readers to gain a sense of how it came to exist, how it functioned and what were its limitations, often severe. Section One discusses the efforts of the Washington, Hawaii and Philippines units in breaking all cryptographic systems used by foreign powers. Section Two covers the roles of Canada and Australia, the secondary powers of the British commonwealth, the Dutch East Indies and China, the secondary independent powers, and other players in the Allied effort. Section Three concentrates on other covert intelligence sharing in London, Hawaii and the Philippines. Section Four ends the text with a discussion of the suppression and their revelation of the role of Great Britain.

Roland H. Worth, Jr., is the author of many books. He lives in Richmond, Virginia. 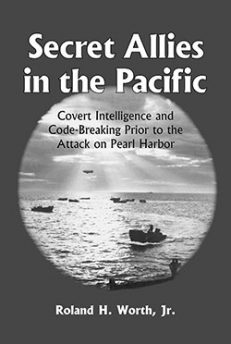 You're viewing: Secret Allies in the Pacific $29.95
Add to cart