View cart “RuPedagogies of Realness” has been added to your cart.

Essays on Teaching and Learning with RuPaul’s Drag Race

Pencils down—graphite and eyebrow—and eyes to front of the room for this one-of-a-kind lesson. Since debuting over a decade ago, the world of RuPaul’s Drag Race has steadily collected both popular and academic interests. This collection of original essays presents insightful analyses and a range of critical perspectives on Drag Race from across the globe. Topics covered include language and linguistics, cultural appropriation, racism, health, wealth, the realities of reality television, digital drag and naked bodies.
Though varied in topical focus, each essay centers public pedagogy to examine what and how Drag Race teaches its audience. The goal of this book is to frame Drag Race as a classroom, one that is helpful for both teachers and students alike. With an academic-yet-accessible tone and an interdisciplinary approach, essays celebrate and examine the show and its spin-offs from the earliest seasons to the very start of the coronavirus pandemic in 2020.

Lindsay Bryde is an award-winning English and education studies instructor with research interests in pop culture, film studies, distance learning, pedagogy, and diversity, equity and inclusion (DEI). She is currently the educational technologist for the Long Island region at SUNY Empire State College.

Tommy Mayberry is an academic drag queen who researches and teaches gender, pedagogy, performance, pop culture, language, literature, and reality TV. They are currently the executive director of the Centre for Teaching and Learning at the University of Alberta (Edmonton, Alberta, Canada).

Halleloo! Acknowledgments v
Hieeeee: An Introduction to the Collection
Lindsay Bryde and Tommy Mayberry 1
Start Your Engines: Critical Context
of the Language and Influence of Drag 13
RuPaul’s Drag Race as a Heterotopic Learning Experience
Vicky Kampouridou 15
The Influence of RuPaul’s Drag Race on Pop Culture and the Way We Talk: A ­Pop-Linguistic Analysis
Ricarda Goetz-Preisner 37
Pedagogy of the Mother: Exploring Freire’s Philosophy of ­Co-Productive Learning
Phillip Joy and Jill Marie McSweeney-Flaherty 59
“And where is the body?” Naked Drag and the Social Construction of Anatomy as Sexed and Gendered
Tommy Mayberry 91
She Already Done Had Herses: When Drag Curates Culture 115
Pop the Corn and Teach the Children: Drag Lessons in Gender, Race, and Class Beyond RuPaul’s Televised Curriculum
Russ Martin 117
“Cultural appropriation! That’s what we never heard”: Performing Indigeneity on Reality Television and Beyond
Maggie Ward 142
RuPaulogetics: Assimilation, Backwash, and the Charisma of Queer Pedagogy
David J. Fine 161
May the Best Drag Queen Win: The Competitive Nature of Drag 183
Gay Super Bowl: Homonormative Authorization, Instruction, and Discipline Through Sports Media Borrowings
Nathan Workman 185
Where Are the Jokes? Comedy as Pedagogy
Peter Piatkowski 205
Digital Drag and YouTube as Queer Space: Queens as Influencers from Performance to Pedagogy
Florian Zitzelsberger 228
Pedagogies, Praxis, and Privilege: RuPaulean Communities of Care
Mandy Penney 252
Sashay Away: Resources to Support Learners 273
Spilling the Tea: Glossary 277
Let’s Have a KiKi: Discussion Questions for the Class 279
Very Special Guest Judge: Select Bibliography 283
Charisma, Uniqueness, Nerve and Talent: About the Contributors 299
The Library Is Open: The Index 303 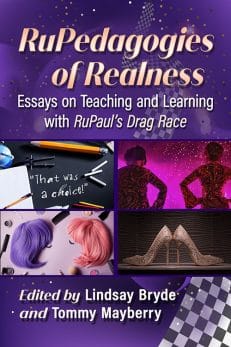 You're viewing: RuPedagogies of Realness $39.95
Add to cart