View cart “Roots of Film Noir” has been added to your cart.

Precursors from the Silent Era to the 1940s

Individual reviews of 90+ films created and released before 1941 are included here in the first title-by-title reference guide to the forerunners of film noir. Silent Hitchcock thrillers and German expressionist masterpieces, French poetic realist dramas and forgotten Hollywood B-movies, pseudo-Freudian gangster films and costume melodramas are among the works covered.

The collection spans subgenres and cultures of filmmaking, aiming to demonstrate that the roots of noir were sown far and wide, long before the lasting and mysterious genre flowered in America during the war years.

Kevin Grant is a film historian and periodical journalist living in London.

“Hollywood film noir reached its heyday in the 1940s and 1950s, but film historian Grant traces its roots through more than 90 films…[He] cross-references reviews that mention similar movies, making the book a useful resource for future viewing. Between his introductory essay and his reviews, Grant provides an extremely helpful commentary on a major film genre. Film buffs will adore this book.”—Library Journal 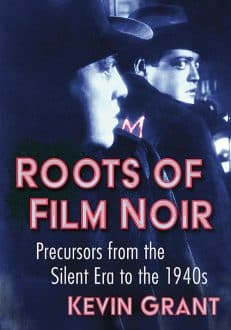