Responses to Self Harm

An Historical Analysis of Medical, Religious, Military and Psychological Perspectives

Self harm is generally regarded as a modern epidemic, associated especially with young women. But references to self harm are found in the poetry of ancient Rome, the drama of ancient Greece and early Christian texts, including the Bible.
Studied by criminologists, doctors, nurses, psychologists, psychiatrists and sociologists, the actions of those who harm themselves are often alienating and bewildering. This book provides a historical and conceptual roadmap for understanding self harm across a range of times and places: in modern high schools and in modern warfare; in traditional religious practices and in avant-garde performance art. Describing the diversity of self harm as well as responses to it, this book challenges the understanding of it as a single behavior associated with a specific age group, gender or cultural identity.

Leigh Dale is professor of English at the University of Wollongong, Australia, and editor of the journal Australian Literary Studies and has published on Australian and postcolonial literatures.

Chapter 1. Classical and Christian Stories of Self Harm 19

Ethnographies of the Galli 21

Psychoanalysis and the Uses of Attis 37

Self Harm and Religious Expression 40

Modern Medicine and the Uses of Myth 49

Spectre and Spectacle: Self Harm as Performance 57

Self Enucleation and Ingestion of Needles 64

Diagnosing and Disclosing Self Harm: Dermatology 84

Dermatology and the “mysterious mental element” 88

Responding to Self Harm 94

Demonizing Self Harm: Beverley Allitt and After 98

Chapter 3. Self Harm as Malingering: Criminology and

Militant Medicine: Self Harm as Crime 106

Chapter 4. The Alien Self: Psychiatry and Psychology 143

Freud and His Followers: Brunswick, Lewis and Greenacre 156

Karl Menninger and Man Against Himself 159

Ferenczi and His Followers 177

The Impact of Self Harm 190

The Language of Self Harm: Speech and Controlled 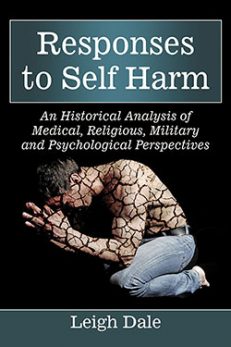 You're viewing: Responses to Self Harm $39.95
Add to cart