View cart “Remaking Horror” has been added to your cart.

This book chronicles the American horror film genre in its development of remakes from the 1930s into the 21st century. Gus Van Sant’s 1998 remake of Alfred Hitchcock’s Psycho (1960) is investigated as the watershed moment when the genre opened its doors to the possibility that any horror movie—classic, modern, B-movie, and more—might be remade for contemporary audiences.
Staple horror franchises—Halloween (1978), Friday the 13th (1980), and A Nightmare on Elm Street (1984)—are highlighted along with their remake counterparts in order to illustrate how the genre has embraced a phenomenon of remake productions and what the future of horror holds for American cinema. More than 25 original films, their remakes, and the movies they influenced are presented in detailed discussions throughout the text.

2 • Psycho: The Last Bastion of Fear and Storytelling in

5 • A Nightmare on Elm Street: The Safety of Sleep

7 • The Interviews: Industry Professionals Riff About the

“well-structured…. He obviously understands his subject matter, and is therefore clear, direct and explicit in his manner of presentation”—Scarlet; “an incisive, in-depth exploration…excellent interviews…a valuable book”—Destructive Music. 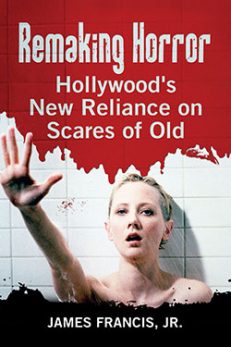