View cart “Nine Lives of Israel” has been added to your cart.

A Nation’s History through the Lives of Its Foremost Leaders

This study offers a concise yet comprehensive account of Israel’s history as told through the lives of nine of its leading citizens and founders. Each chapter chronicles a critical epoch in the Israeli saga and catalogs the impact made on that epoch by one of nine leading protagonists—Theodor Herzl, Chaim Weizmann, David Ben-Gurion, Abba Eban, Moshe Dayan, Golda Meir, Menachem Begin, Yitzhak Rabin, and Ariel Sharon. The result is a narrative that traces events from the genesis of modern political Zionism in the late 19th century to the present. A tapestry of history, biography and myth deconstruction, this volume provides a distinctive introduction to a nation that—whether it inspires pride or incites passions—never ceases to fascinate.

1. Theodor Herzl and the Genesis of Modern Political Zionism      7

“best introduction to Israel’s short yet tumultuous history”—Chicago Jewish Star; “I can strongly recommend Jack Schwartzwald’s Nine Lives of Israel…it is comprehensive, lively and informative…a real contribution to the ongoing debate about Israel’s past and future.”—Sir Martin Gilbert, author of Israel, A History; “In an age when so much research ignores the human factor and focuses on theories and models, it is refreshing and very welcoming to see a book that understands the importance of individuals in the shaping of history. The leaders of Zionism and Israel who are the subject of this study were all larger than life, fascinating characters and the author should be commended for reminding us of that too often forgotten fact by showing the human face of the Jewish national revival and its successful product, the state of Israel.”—Professor Efraim Karsh, Kings College, London; “Solid in scholarship, written with clarity and force, Schwartzwald’s book shows how the Jewish state, now widely defamed as the devil’s own experiment station, was in fact one of the few redeeming events of the blood-soaked twentieth century.”— Edward Alexander, co-author, The Jewish Divide over Israel; “One of the key elements in understanding the history of Israel and the Middle East is the personality and worldview of the leaders whose decisions have helped take a dream of a Jewish state and turn it into a reality, enabled that state to survive through six decades of war and terror, and brought about peace along two of its frontiers. Jack Schwartzald provides an entertaining and thoughtful analysis of nine of the most important leaders in Israel’s history that will help readers better understand how individuals can change the world.”—Mitchell Bard, author Will Israel Survive?; “Taken together (Schwartzwald) is able to present more than 9 mini-biographies—he is able to tell the moving story of a unique people, a dynamic society and a fascinating country.”—Elliott Dlin, Executive Director, Dallas Holocaust Museum. 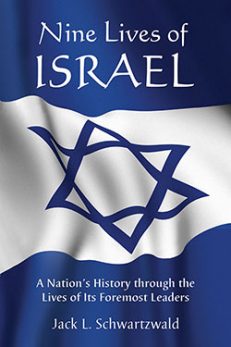