View cart “Lockerbie and Libya” has been added to your cart.

A Study in International Relations

The bombing of Pan Am flight 103 in 1988 over Lockerbie, Scotland, and the politics that surround this early anti–U.S. terrorist act provide a fascinating case study in international relations. The event severely impacted Libya’s relationship with the United States, the United Kingdom and the United Nations.
This work examines all facets of the Lockerbie tragedy including the police investigation and indictment of two Libyan citizens, the imposition of international sanctions against Libya, that country’s response and the years of tension and conflict that followed, the role of political mediation (most notably by Prince Bandar bin Sultan and President Nelson Mandela), the trial in the Netherlands, Muammar Qaddafi and Libya’s increasing maturity in dealing with complex international situations, and the flight 103 bombing’s significance within the context of the events of September 11, 2001.

Khalil I. Matar is a journalist who has reported on the United Nations for 20 years and has been covering the Libyan case with the United States and the UN since the early 1980s.
Attorney Robert W. Thabit was appointed by Kofi Annan, Secretary General of the United Nations, as an International Observer to the Lockerbie Trial.

Part I. Early Theories Fail; Sanctions Are Imposed on Libya

Part V. The Role of Prominent Personalities, and the Handover

Part VI. The Scottish Court in the Netherlands

“its major strength is that the authors refuse to accept the official American line…highly recommended”—Choice; “a fascinating case study in international relations”—Arab-American Affairs; “an excellent case study”—Catholic Library World; “the most detailed study published to date of the extensive talks leading to the Lockerbie settlement in 2003…refreshing…a welcome addition to the literature on comtemporary Libyan politics”—Middle East Journal. 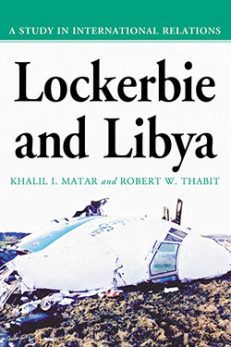 You're viewing: Lockerbie and Libya $39.95
Add to cart