The Complete Jewish History of the World’s Greatest Hero

Superman is the original superhero, an American icon, and arguably the most famous character in the world—and he’s Jewish! Introduced in June 1938, the Man of Steel was created by two Jewish teens, Jerry Siegel, the son of immigrants from Eastern Europe, and Joe Shuster, an immigrant. They based their hero’s origin story on Moses, his strength on Samson, his mission on the golem, and his nebbish secret identity on themselves. They made him a refugee fleeing catastrophe on the eve of World War II and sent him to tear Nazi tanks apart nearly two years before the US joined the war. In the following decades, Superman’s mostly Jewish writers, artists, and editors continued to borrow Jewish motifs for their stories, basing Krypton’s past on Genesis and Exodus, its society on Jewish culture, the trial of Lex Luthor on Adolf Eichmann’s, and a future holiday celebrating Superman on Passover. A fascinating journey through comic book lore, American history, and Jewish tradition, this book examines the entirety of Superman’s career from 1938 to date, and is sure to give readers a newfound appreciation for the Mensch of Steel!

Roy Schwartz has written for newspapers, magazines, websites, academic organizations, law firms, tech companies, toy companies, and production studios. He has taught English and writing at the City University of New York and is a former writer-in-residence at the New York Public Library. He is the director of marketing and business development of a regional law firm.

Part I. Scriptural Superheroes: The Ancient Roots of the Man of Tomorrow
Samson, Solomon and Other Supermen 10
Paradigmatic Parallels: Superman as Moses 22
Sent by His Father: Superman as Jesus 33
World’s Finest: Settling the Denominational Debate 47

Part II. Shticks from the Shtetl: How Jews Created Comics and Caped Crusaders
Hitler, Hollywood and Houdini 56
Famous Funnies and Other Firsts: The Birth of Comic Books 70
The Big Bang 88

Part IV. Postwar to Postmodern: Redefining Superman, Comics and Judaism
Superman vs. the Mad Scientist: The Postwar Era 182
If I Were a Superman: The Silver Age 210
Nazis in Space and Superman on Screen: The Bronze Age 228
Second Coming: The Dark Age 254
Superman Supernal: The Modern Age 286

•”A fascinating, illuminating and highly accomplished study of a comic book character…lively and often funny…You will never look at Superman in quite the same way after reading Is Superman Circumcised?” –Jewish Journal

• “An in-depth examination of the Jewish roots of the character…a deep-dive into arguably the world’s most famous and iconic fictional character and his Jewish influences. …This book is a must-have for any fan of superheroes, comic books and Jewish history and literature.”—Jerusalem Post

• “Is Superman Circumcised? is the kind of book that will be adored by fans of Comic-Con…It’s fun, it’s scholarly, and it’s long. Don’t try to read it straight through. Instead, enjoy it pausing between episodes, just as Superman Comics were also meant to be consumed.”—San Diego Jewish World

• “A fascinating journey through comic book lore, American history and Jewish tradition, this book examines the entirety of Superman’s career from 1938 to date and promises to provide readers a newfound appreciation for the ‘Mensch of Steel.’”—Cleveland Jewish News

• “Throughout the book…Schwartz approaches the subject with an academic lens and a fan’s passion, with text-parsing that would have impressed the rabbis of the Talmud.”—The Forward

• “Schwartz begins his book with something of a cliche, dutifully comparing the now-familiar origin of Superman to the Biblical patterns of the Hebrew Bible… . But cliches are sometimes cliches for a reason: they can be oft-repeated precisely because they are true.”—Comics XF

• “Roy Schwartz has done a deep dive into the history, mythology and cultural folklore of America’s super-heroes and his conclusions are indisputable. The contemporary concept of the super-hero, as old as the story of Moses, was birthed by Jewish immigrants and first generation Jewish kids from the tales, morals and ethics of their Jewish ethnical roots. The majority of the creators from 1938’s GoldennAge of Comics through the 1960’s Marvel Age of Comics were Jewish. Whether it was Jerry Siegel and Joe Shuster turning Moses into Superman or Stan Lee and Jack Kirby transforming The Golem into The Hulk, their heroes embodied their Jewish experience. Roy Schwartz analysis is scholarly yet broadly entertaining. He answers many questions and leaves the readers with but one: ‘If there were no Jews on Krypton where Superman was born, and if he was therefore circumcized on earth, did the moyal have to use a Kryptonite scalpel?’”—Michael Uslan, comic book historian and originator and executive producer of the Batman movie franchise

• “I am floored by this deep and beautiful examination of history, liturgy, and culture. If you believe in comics as the holders of miracle, myth, and mystery, this is the book for you.” –Mayim Bialik, actress, author, neuroscientist

• “Schwartz demonstrates extraordinary insight in his overview of the intersection of comics, the history of heroes and heroines, theological knowledge, and pop culture…[and] imparts the information with humor, focus…and an uncanny ability to join the concepts in an accessible, entertaining, and enlightening way.” –Times Beacon Record 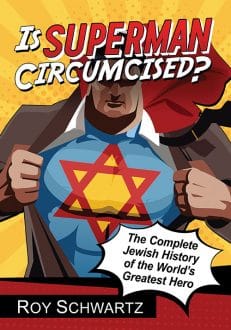 You're viewing: Is Superman Circumcised? $45.00
Add to cart