A Companion to the Mystery Fiction

Ian Rankin is considered by many to be Scotland’s greatest living crime fiction author. Most well known for his Inspector Rebus series—which has earned critical acclaim as well as scores of fans worldwide—Rankin is a prolific author whose other works include spy thrillers, nonfiction books and articles, short stories, novels, graphic novels, audio recordings, television/film, and plays.
This companion—the first to provide a complete look at all of his writings—includes alphabetized entries on Rankin’s works, characters, and themes; a biography; a chronology; maps of Rebus’ Edinburgh; and an annotated bibliography. A champion of both Edinburgh and Scotland, Rankin continues to combine engaging entertainment with socio-political commentary showing Edinburgh as a microcosm of Scotland, and Scotland as a microcosm of the world. His writing investigates questions of Scottish identity, British history, masculinity, and contemporary culture while providing mystery readers with complex, suspenseful plots, realistic character development, and a unique mix of American hard-boiled and procedural styles with Scottish dialects and sensibilities.

Erin E. MacDonald is a professor of English at Fanshawe College’s School of Language and Liberal Studies in London, Ontario. She published a literary companion book on Ed McBain and edited a collection of essays on Robert Downey, Jr. Her articles have appeared in the Journal of American and Comparative Cultures and in Clues.

• “Congratulations to Erin—I know how hard she worked. And she unearthed more than a few things I’d forgotten I’d written!”—Ian Rankin

• “Fascinating biography…definitely belongs in mystery reference collections…Rebus devotees will love having a copy at the ready when they find themselves wanting to check backstories on the multiple repeating characters.”—Booklist

• Reviews of the Series: “The McFarland Companion series…has been consistently excellent, both in its choice of subjects and its quality of scholarship and writing”—Mystery Scene 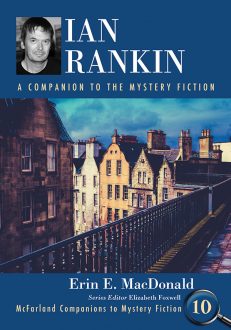