View cart “Grimm’s Trailer Full of Secrets” has been added to your cart.

Character and Gender in the Television Series

NBC’s Grimm is an understudied series full of compelling characters, including Monroe, the charmingly knowledgeable vegetarian who looks like a werewolf; Wu, the funny cop who beats his way to the truth; Adalind, the enjoyably vengeful, risk-taking witch; Trubel, the furious young loner accused of insanity; Kelly, a powerful older warrior-woman; Nick, a compassionate detective; Hank, Juliette, Rosalee and others.

This book, which includes a chapter on each key figure, explores the fascinating world of characterization in television. The storyline, as well as the dialogue, acting, costumes, scenery, lighting and music, contribute to in-depth depictions that evolve over time. Grimm’s figures confound our perceptions of race, age and gender. They demonstrate the ability of TV characters to build unforgettable, meaningful connections.

Rhonda V. Wilcox is professor emeritus at Gordon State College in Georgia. For ten years she was the editor of Studies in Popular Culture. She is cofounder and editor of Slayage and is the author of previous books on Buffy the Vampire Slayer and other series. She lives in Decatur, Georgia.

Acknowledgments vi
Introduction: Characters Full of Secrets 1
One. “The dark does have its bright side”: Monroe and the Liminal ­Hero-Sidekick Tradition of Spock, Spike, and Illya Kuryakin 19
Two. “I don’t have a problem with it”: Killing, Sex, and the African American Cop—Hank 40
Three. “I’m in control”: Sergeant Wu, Wit, and Sexual Ambiguity 56
Four. “I never choose sides”: ­Prince-Father-Captain Sean Renard and the Gothic ­Hero-Villain of Patriarchy 75
Five. “You know, Nick—he’s a sensitive Grimm”: Nick Burkhardt, Emotional Engagement, and Male Melodrama 94
Six. “Women become aware sooner than men”: Marie Kessler, Kelly Burkhardt, and the Crones of Portland 121
Seven. “Smoking that hat”: The Shape of Power for Fred/Illyria in Angel and Juliette/Eve in Grimm 137
Eight. “I’ve seen this before”: Rosalee Calvert and Practical Magic 152
Nine—“I just drank my mother”: The Abjection of Adalind Schade 169
Ten. “I really didn’t expect to live this long”: Trubel and the Combative Female 192
Eleven. “You haven’t named her yet?”: Diana as Demon Child 205
Conclusion: Character and Auteurism 217
Appendix: Grimm Episode List 221
Chapter Notes 227
Works Cited 237
Index 247

• “Reading Rhonda Wilcox’s book is like peering into Grimm’s ‘trailer full of secrets’ and finding an entryway into the magic of television narrative. In her brilliant and compelling study of the series and its characters, Wilcox pores over the lore to make connections and find meaning. As Wilcox maps Grimm’s inheritance of and play with multiple traditions, including fairy tales, folklore, and television, she illuminates the complex identity politics of the characters and series. Grimm’s Trailer Full of Secrets continues Wilcox’s ever-important work investigating how and why television matters in contemporary culture.”—Lisa K. Perdigao, Florida Tech School of Arts and Communication, co-editor, The CW Comes of Age: Essays on Programming, Branding and Evolution

• “Grimm is a labyrinthine world of monsters and magic, and Rhonda Wilcox’s Grimm’s Trailer Full of Secrets is a treasure trove of insight and observation that deftly guides the reader—like a Grimm in-training—through the nuances and complexities of this rich TV series. Looking at the show through the lens of character, reflecting on casting, performance, representation, and the impact of serial narrative, Wilcox’s skilful analysis highlights the importance of the ensemble cast to the show’s success and unlocks many of its mysteries, revealing a rich tapestry of storytelling. It is a must-read for the fan, student, and future Grimm.”—Stacey Abbott, University of Roehampton, UK, author of Angel: TV Milestone and Undead Apocalypse

• “Though characters must regularly lurk in media studies’ shadows, appearing only for a paragraph here or there, Grimm’s Trailer Full of Secrets is refreshingly all about character. Grimm-like, and with (dare I say) a lot of character, Rhonda V. Wilcox voyages into these shadows, offering both a superb analysis of Grimm and a strong argument for the importance of centering characters in future work.”—Jonathan Gray, University of Wisconsin-Madison, author of Television Entertainment 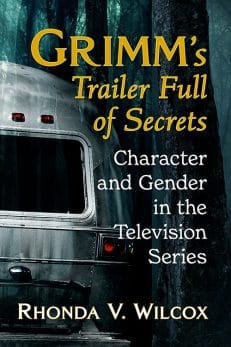 You're viewing: Grimm’s Trailer Full of Secrets $39.95
Add to cart