View cart “General Abner M. Perrin, C.S.A.” has been added to your cart.

More than 1,000 men held the rank of brigadier general during the Civil War, but a surprising number remain unknown to all but the most ardent scholar. These lesser-known brigadiers, like General Abner M. Perrin (1830–1864), played much more than a casual role in the momentous conflict. Perrin, of the South Carolina 14th Regiment, took part in all of the major battles of the Army of Northern Virginia. At Gettysburg, he assumed command of a brigade whose general was wounded and defeated all opponents to lead the first troops to enter the town. He received a promotion to brigadier general for his actions and commanded his own brigade at Mine Run, the Wilderness, and Spotsylvania, where he was mortally wounded. This welcome biography chronicles Perrin’s life and military career, removing this deserving Civil War personality from the shadows of history.

Historian Ron V. Killian taught United States history for 41 years before retiring. He is the author of two books on Civil War history.

“very much recommended”—Midwest Book Review; “worth reading to learn what is available on the life of this little-known Confederate general”—Civil War News. 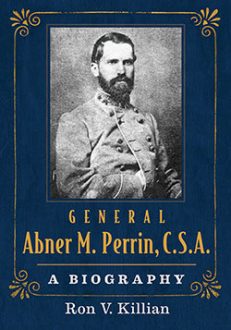