Life of a Salvadoran Revolutionary and Gentleman

Enrique Alvarez Córdova was the son of one of El Salvador’s ruling families. Intelligent, charismatic and above all wealthy, he had nothing to gain—and a great deal to lose—by courting revolution. Yet this young man with all the advantages did just that. Impressed by the poverty and miserable existence of the rural population, Alvarez set about making a change. He spent most of his adult life working for reform within the constraints of the existing system, serving as minister of agriculture under three governments. He turned his own ranch, El Jobo, into a successful workers’ cooperative to convince the ruling class that agrarian reform was possible and even profitable. In the end, however, he found that fundamental change was simply beyond the reach of such efforts. Embracing armed struggle as a last resort, he ultimately became one of the revolution’s first casualties.
Centering on El Salvador’s political landscape, this biography details the life of one of the nation’s little known revolutionaries. The body examines the motivations behind Alvarez’s choice to become a traitor to his class and embrace political reform, first through his work within the government itself and later as president of the Democratic Revolutionary Front (FDR), the country’s primary radical movement. Through this lens, the work also describes El Salvador’s political evolution, illuminating the country’s internal situation during the 1970s and early 1980s. The government-condoned assassination of Alvarez and five of his FDR colleagues in November 1980 ended the last hope of avoiding an armed conflict. Within two months of the assassinations, El Salvador was plunged into a civil war that would last for the next 11 years. Other than a few official legal documents, the work is compiled from interviews and testimony of those who knew Enrique Alvarez Córdova, thus providing a contemporary, firsthand perspective. The work is also indexed.

John W. Lamperti is a professor of mathematics emeritus at Dartmouth College. He is the author of several books on the theory of probability and on random processes. He lives in Norwich, Vermont. 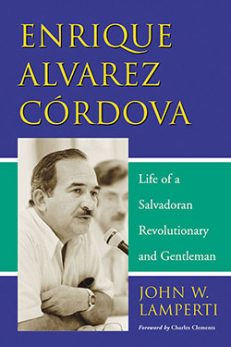