View cart “Charles Ludlam and the Ridiculous Theatrical Company” has been added to your cart.

In the late 1960s, Charles Ludlam (1943–1987) brought his unique brand of theatre to New York audiences. Based in part on traditional comic characters, his “ridiculous” school included such inspirations as Hollywood B movies, camp, drag, and opera. His shows were also a study in self-collaboration; Ludlam acted as playwright, director, designer, and actor in his own Off Broadway theatre—the Ridiculous Theatrical Company.
Critically, Ludlam’s works were often overlooked or misunderstood, and since his death The Mystery of Irma Vep is the only one of his 29 plays consistently performed in regional theatres. This work provides an overview of Ludlam’s life, explores the theatrical underpinnings of his work and goes on to cover the entire Ludlam canon. The book includes examinations of such plays as Le Bourgeois Avant-Garde, Bluebeard, Galas and Stage Blood. It concludes with a look at Ludlam’s work in the 1980s when he focused on presenting new plays, many of them original farces.

Rick Roemer is a professor of theatre at the Sarofim School of Fine Arts at Southwestern University in Georgetown, Texas. He has directed more than 30 productions and as an actor has appeared on Broadway, Off Broadway, and in national tours, regional theatres, daytime soaps, and commercials. He lives in Austin.

“provides an overview of Ludlam’s life, exploring the theatrical underpinnings of his work and then the whole Ludlam canon”—Reference & Research Book News. 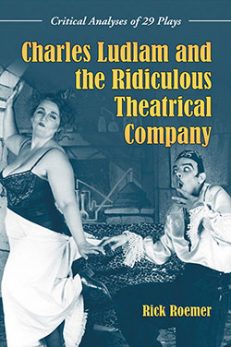 You're viewing: Charles Ludlam and the Ridiculous Theatrical Company $39.95
Add to cart