View cart “Baseball in the Carolinas” has been added to your cart.

Baseball in the Carolinas

25 Essays on the States’ Hardball Heritage

It is not known exactly when base ball first made its way down to the Carolinas, but it was being played in North and South Carolina at least as early as the Civil War. By the early years of the twentieth century, the game had become a dominant form of entertainment in both states—and has remained a part of many communities across the Carolinas ever since. This work is a collection of 25 nonfiction stories about baseball as it has been played in the Carolinas from its early days to the present. Contributors to this work include Marshall Adesman writing about his love for the Durham Athletic Park, David Beal remembering the last bus trip the Winston-Salem Warthogs made to play the Durham Bulls in 1997 before the Bulls became a Triple A team, Robert Gaunt writing about the All-American Girls Baseball League and its players in South Carolina, Thomas Perry telling the story of Shoeless Joe Jackson’s start in baseball in the textile leagues, Parker Chesson relating the 1947 Albemarle League playoff, and Bijan Bayne chronicling black professional baseball in North Carolina from World War I to the Depression, just to name a few.

Chris Holaday is a fulltime copywriter and photographer in Durham, North Carolina. A member of the Society for American Baseball Research, he is the author of several other books on baseball history. 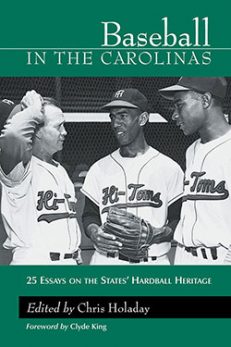 You're viewing: Baseball in the Carolinas $29.95
Add to cart