Following the atomic bombings of Hiroshima and Nagasaki, numerous “atomic narratives”—books, newspapers, magazines, textbooks, movies, and television programs—addressed the implications of the bomb. Post–World War II youth encountered atomic narratives in their daily lives at school, at home and in their communities, and were profoundly affected by what they read and saw.

This multidisciplinary study examines the exposure of American youth to atomic narratives during the ten years following World War II. In addition, it examines the broader “social narrative of the atom,” which included educational, social, cultural, and political activities that surrounded and involved American youth. The activities ranged from school and community programs to movies and television shows to government-sponsored traveling exhibits on atomic energy. The book also presents numerous examples of writings by postwar adolescents, who clearly expressed their conflicted feelings about growing up in such a tumultuous time, and shows how many of the issues commonly associated with the sixties generation, such as peace, fellowship, free expression, and environmental concern, can be traced to this earlier generation.

Editor and writer Michael Scheibach received his doctorate in American studies and taught history, humanities, and writing as an adjunct professor for several years. He lives in Miami, Florida. 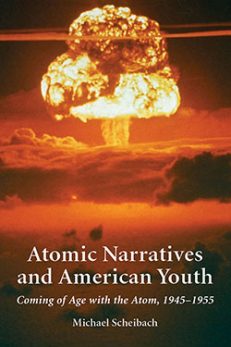 You're viewing: Atomic Narratives and American Youth $29.95
Add to cart