Essays on the Toys and Their Messages

Action figures are more than toys or collectibles—they are statements on race, gender, class, body positivity and more. This collection of nine new essays and one interview argues that action figures should be analyzed in the same light as books, movies, television shows and other media. Through an examination of the plastic bodies that fill our shelves and toy boxes, “Action Figure Studies” can inform the next generation of toys.

Jonathan Alexandratos is a playwright and essayist who lives, teaches, and writes in New York City. His plays, like his academic work, usually involve action figures and pop culture, and have been produced internationally.

Thirteen Ways of Looking at an Action Figure: Part One 13
Daniel F. Yezbick
The (Re)Resurrection of Captain Action: Will Justice Be Done? 28
Thomas G. Endres
Plastic Military Mythology: Hypercommercialism and Hasbro’s G.I. Joe: A Real American Hero 39
J. Richard Stevens
The Same Aisle: The Intersection of Resistance and Discipline in Brony Fandom, or, Friendship Is Mythological 58
Tracy L. Bealer
Selling Girl Power in the 1980s: ­She-Ra and the Gendered Dimensions of Action Figures 71
Keith Corson
“Seeing into the life of things”: Toy Story, The Lego Movie and the Wordsworthian Imagination 85
Geoff Klock
Get Your Freak On: The Monstrous Seduction in Mattel’s Monster High 99
Cathy Thomas
All Dolled Up: Monster High, Project MC2 and “Action” Figures 120
Christopher Bell
“Toys with brains”: Skylanders and the Growth of the Toys-to-Life Market 135
Kimberly A. Owczarski
Thirteen Ways of Looking at an Action Figure: Part Two 152
Daniel F. Yezbick
“I was always Wonder Woman”: An Interview with IAmElemental’s Julie Kerwin 170
Jonathan Alexandratos

Review Fix chats with Articulating the Action Figure: Essays on the Toys and their Messages editor Jonathan Alexandratos, who discusses the book and the impact he’d like to have on readers.

Review Fix: Why do people still love action figures so much?

Jonathan Alexandratos: I’m not sure everyone does.  Some sales numbers have been fairly depressing.  But that’s not to say there aren’t fans, and the fans that exist are all-in.  Plus, the kids that play with action figures are also generally really into them, so the fan base we have, we really have.  When we look at why fans are so devoted, I think we need to separate the fandom into at least two groups: kids and adult collectors.  Kids love action figures for lots of reasons, but one great one is that they’re avatars for themselves in the world of play.  When an action figure becomes “you,” then it’s not, say, Bumblebee fighting the Joker (yep, I’m crossing properties here because, well, you can, of course, when you’re playing), it’s you fighting the Joker as Bumblebee.  And it certainly doesn’t have to be a fight.  World-building on its own is great, and typically that’s led by one favorite toy/avatar exploring the world you’re creating.

That world is physical, too, which I think appeals to the more kinesthetic and visual kids who want to not only see what they’re making but touch it and interact with it.  Adult collectors may enjoy some of this, too (I know I do), but they have a developed nostalgia where the toys can act as an artifact from the past that has the power to transport its owner back to the moment where he/she/they either did or didn’t get the action figure in question.  This is why companies like Funko have been so successful.  They can tap into older collector nostalgia, but they keep their price points generally low so, if a kid should want a Pop!, it won’t be a huge expense.  More and more, toy companies are starting to think like this.  They’re starting to answer the question: “How can we appeal to the older collector and the younger audience at the same time for a low price?”  This is why Mattel offers Jurassic World toys along with Jurassic Park toys meant to appeal to those who remember the first film of the franchise.

Review Fix: What are some of your favorites?

Alexandratos: My favorites change depending on what I’m playing with that week, but some recurring choices are:

Alexandratos: I always wanted to write about action figures, academically.  They struck me as one of the last unexplored frontiers of media.  I mean, plenty has been written about toys and action figures.  That’s not new.  But the scholarly work has been lacking.  I wanted to change that, and, luckily, I had a bunch of extremely intelligent friends who wanted to do that, too.  A lot of the writers involved in the collection are people who have presented at Page 23, the literary conference powered by Denver Comic Con (I co-manage this lit con).  Each year, we were getting together and talking about toys; it just made sense to expand that conversation into a book.

Review Fix: What was the initial goal of the book? Do you think you succeeded?

Alexandratos: The goal was to demonstrate that toys are academically-viable texts.  Because of the diverse essays involved in the collection, I think I succeeded in demonstrating this.  Since the book came out, it’s appeared on more than a few college syllabi, and that’s really been great.

Alexandratos: My toy research has been going on my whole life, but it really kicked off in grad school (roughly eight years ago).  I was taking courses in gender and sexuality, and we were asked to analyze various texts.  I started using action figures as my texts because the gender theory we were learning fit really well.  For instance, when you have an entire movement, in the 1990s, to bulk up Star Wars figures beyond all realistic expectation, the toys are performing gender in a way theorists have been interested in (in other contexts).  From there, I started to think about other theorists, both within gender theory and beyond, that could be put in conversation with toys.  After that, I opened up my research to many sources, not just theorists.  I looked at action figure magazines of the 1990s (the letters page, mostly), YouTube comments sections, basically anywhere people wrote about toys.

Review Fix: What has the reception been like so far?

Alexandratos: It’s been great!  We got a couple of stellar reviews, and, as I mentioned, have been used in some college courses.  I’m very happy with the reception.  Of course, one always wants a broader reach, but the people that have liked the work seem to have really liked it, and I’m proud of that.

Review Fix: Any plans on continuing your research?

Alexandratos: Definitely – always.  I’m an action figure collector to the bone, and I’ll never stop writing about toys.  I’ll never stop teaching with toys.  I’m working on a paper now on Robotech with my writing partner Dan Yezbick, and we’re preparing work on Star Wars toys, too.  There is so much to say!

Alexandratos: Pop culture scholars.  Toy collectors with an academic interest.  Teachers who like non-traditional media.  The general public might enjoy it, too, but the language is pretty academic, which isn’t for everyone.

Review Fix: How do you want this book to be remembered?

Alexandratos: I want it remembered as the first collection of academic essays devoted solely to the action figure – which it is!

Alexandratos: I do lots of work as a playwright, and I have a couple of commissions to fulfill, there.  (I use action figures and toys in that work, too.)  Academically, I’ve got a couple of essays to wrap up for some pretty exciting books, including the Oxford Guide to Comics Studies, which are all projects I’m working on with Dan Yezbick, who is in my book, too.  Plus, I have a lot of toys to buy!

Review Fix: What do you think lies ahead for the future of action figures?

Alexandratos: It’ll be interesting to see.  Tariffs imposed by the Trump administration could hurt sales in the short-term.  Sources have already said that Target has placed all their toy orders for the remainder of the year, some even going so far as to suggest that all of their stock is sitting in their warehouses as we speak (this is unconfirmed).  I hope action figures have a rich future, though, as they’re just starting to change to become more inclusive.  IAmElemental toys (an indie, feminist action figure line), Star Wars Forces of Destiny, and DC SuperHero Girls have all made strides to give girls meaningful representation in the action figure realm.  There’s more work to do in this regard, but this is at least a start.  Nostalgia, too, has been a market gamechanger because both Mego and Polly Pocket (along with virtually everything Funko) has served the consumers that were kids in the 1970s, 1980s, and, now, even 1990s and are looking to buy back their old favorites.  I wonder if, with the ever-growing video game market, this market (the nostalgia market) will continue to grow and kid-bought action figures will shrink.  Kids are still pretty psyched about action figures, though, but their consumership does tend to ebb and flow with the annual blockbusters and hit TV shows that drive them to desire plastic representations of these fantastical worlds.  Action figures took a hit, financially, in 2017, and that was largely blamed on this effect and the lack of toyetic film properties.  I’m excited about the future of action figures, but I think it’ll bring challenges the industry hasn’t quite seen yet. 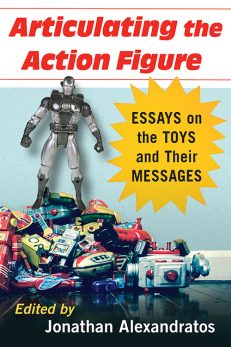 You're viewing: Articulating the Action Figure $19.99
Add to cart