View cart “Miyazaki’s Animism Abroad” has been added to your cart.

The Reception of Japanese Religious Themes by American and German Audiences

After winning an Oscar for Spirited Away, the Japanese director Hayao Miyazaki’s animated films were dubbed into many languages. Some of the films are saturated with religious themes distinctive to Japanese culture. How were these themes, or what Miyazaki describes as “animism,” received abroad, especially considering that they are challenging to translate? This book examines how American and German audiences, grounded on Judeo-Christian traditions, responded to the animism in Miyazaki’s Nausicaä of the Valley of the Wind (1984), My Neighbor Totoro (1988), Princess Mononoke (1997), Spirited Away (2001), and Ponyo on the Cliff by the Sea (2008). By a close reading of adaptations and film reviews, and a study of transitions in their verbal and visual approaches to animism, this book demonstrates that the American and German receptions transcended the conventional view of an antagonistic relationship between animism and Christianity. With the ability to change their shapes into forms easily accessible to other cultural arenas, the anime films make a significant contribution to inter-religious dialogue in the age of secularization.

Eriko Ogihara-Schuck is a lecturer in American studies at the Technische Universität Dortmund, Germany. She has lived in Germany, Japan, Singapore and the United States. 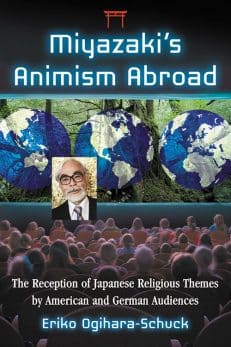