View cart “Women Pulitzer Playwrights” has been added to your cart.

Biographical Profiles and Analyses of the Plays

In the first century of the coveted Pulitzer Prizes, only 11 women have won the prize for drama: Zona Gale (1921), Susan Glaspell (1931), Zoe Akins (1935), Mary Coyle Chase (1945), Ketti Frings (1958), Beth Henley (1981), Marsha Norma (1983), Wendy Wasserstein (1989), Paula Vogel (1998), Margaret Edson (1999), and Suzan-Lori Parks (2002).
This book is about them and their landmark plays, beginning with Gale’s Miss Lulu Bett, which championed the unmarried woman forced to work in the home of a married relative, and closing with Parks’ controversial Topdog/Underdog, which made her the first black woman to win the prize.
Drawn from personal interviews with the playwrights and research from archives and unpublished material, this work shows how the stage art of women has reflected life in the American family and traces a strong thread of feminist history in our culture. Overview chapters set the stage for each playwright and play with sketches of the time period, highlighting the major points of women’s experiences in culture, society and the family. Other chapters analyze each play in detail and discuss the playwright’s life and opinions. The book also includes a quick history of the Pulitzer Prize and a chapter honoring black female playwrights.

Carolyn Casey Craig taught theatre and women’s studies at Loyola University in Chicago and is a member of the Actors’ Equity. She now lives in Portland, Oregon.

Introduction. “Take, for Example…”: A Brief Retrospect on Women, Theatre, and Prizes      1


PART V. HISTORY IN THE STAGING? SUZAN-LORI PARKS AND THE SISTERHOOD OF BLACK PLAYWRIGHTS      249 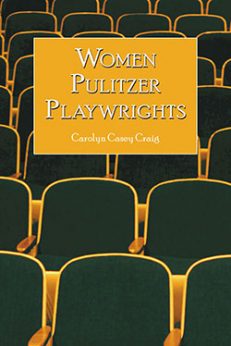