View cart “Willful Monstrosity” has been added to your cart.

Taking in a wide range of film, television, and literature, this volume explores 21st century horror and its monsters from an intersectional perspective with a marked emphasis on gender and race. The analysis, which covers over 70 narratives, is organized around four primary monstrous figures—zombies, vampires, witches and monstrous women. Arguing that the current horror renaissance is populated with willful monsters that subvert prevailing cultural norms and systems of power, the discussion reads horror in relation to topics of particular import in the contemporary moment—rampant sexual violence, unbridled capitalist greed, brutality against people of color, militarism, and the patriarchy’s refusal to die. Examining ground-breaking films and television shows such as Get Out, Us, The Babadook, A Quiet Place, Stranger Things, Penny Dreadful, and The Passage, as well as works by key authors like Justin Cronin, Carmen Maria Machado, Helen Oyeyemi, Margo Lanagan, and Jeanette Winterson, this monograph offers a thorough account of the horror landscape and what it says about the 21st century world.

Natalie Wilson is a professor of women’s, gender, and sexuality studies at Cal State San Marcos in San Diego, California. She writes and teaches in the areas of popular culture, film, television, horror, women’s literature, and feminism.

“Wilson’s text is a nice balance of research and a close reading of popular horror media. The result is a book that is a comprehensive analysis of the role that race and gender play in 21st Century horror.”—Signal Horizon Magazine 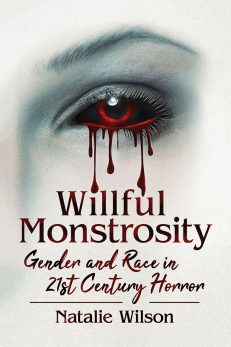