Wilkie Collins, Vera Caspary and the Evolution of the Casebook Novel

Wilkie Collins was one of the most popular novelists during England’s Victorian era. While Collins scholarship has often focused on social issues, this critical study explores his formal ingenuity, particularly the novel of testimony constructed from epistolary fiction, trial reports and prose monologue. His innovations in form were later mirrored by Vera Caspary, who adapted The Woman in White three times into contemporary fiction. This text explores how the formal dialogue between Collins and Caspary has linked sensation fiction with noir thrillers and film noir.

A.B. Emrys is professor emeritus of English at the University of Nebraska-Kearney. She lives in Winter Park, Florida. 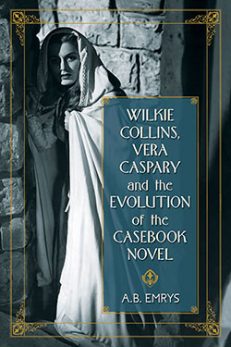 You're viewing: Wilkie Collins, Vera Caspary and the Evolution of the Casebook Novel $49.95
Add to cart