Nearly 130 years after the introduction of Sherlock Holmes to readers, the Great Detective’s identity is being questioned, deconstructed, and reconstructed more than ever. Readers and audiences, not to mention scholars and critics, continue to analyze who Sherlock Holmes is or has become and why and how his identity has been formed in a specific way.
The films Sherlock Holmes, Sherlock Holmes: A Game of Shadows, and Mr. Holmes and television series Sherlock and Elementary have introduced wildly divergent, yet fascinating portrayals that reveal as much about current social mores and popular culture as about the detective. More than ever, fans also are taking an active role in creating their own identities for Holmes through fan fiction and art, for example.
“Who is Sherlock Holmes?” is still a viable question. The answers provided by illustrators, scriptwriters, directors, costume designers, set designers, actors, scholars, and fans provide insights into both Victorian and the modern-day Sherlock.
Like the many disguises the Great Detective has donned throughout canon and adaptations, his perceived identities may be surprising or shocking, but they continue to make us look ever more closely to discover the real Sherlock Holmes.

Lynnette Porter is a professor in the Humanities and Communication Department at Embry-Riddle Aeronautical University in Daytona Beach, Florida, and has written extensively on television and film.

Introduction 1
From Paget to Screen: A (Re)Vision of Sherlock Holmes
for the 21st Century (Clare Douglass Little) 5
Modernizing Victorian Sherlock Holmes for Mr. Holmes and the BBC’s Sherlock Special (Lynnette Porter) 18
“I made me”: Narrative Construction of Identity in Sherlock’s “The Abominable Bride” (Felecia McDuffie) 33
Inside the Mind of Sherlock Holmes (Lynnette Porter) 48
It’s Traumatic Stress, My Dear Watson: A Clinical Conceptualization of Sherlock (Jennifer Dondero and Sabrina J. Pippin) 70
A ­High-Functioning Sociopath Married to His Work: On Hegemonic Masculinity in the BBC’s Sherlock (Deborah M. Fratz) 82
The BBC’s Sherlock: A “Sociopathic” Master of the Social Game (Kathryn McClain and Grace Cripps) 95
The Evolution of James Moriarty: How Villains Mirror Cultural Anxieties (Heather Powers) 111
God, Grace and Sherlock: Religious Narrative and Identity in BBC’s Sherlock (Felecia McDuffie) 122
Chosen Families, TV and Tradition: Queering Relations in the BBC’s Sherlock (Linda J. Jencson) 140
Fan Fiction as an Argument: Arguing for Johnlock through the Roles of Women and Explicit Sex Scenes in Sherlock Fan Fiction (Alyxis Smith) 156
(No) Sex and Sherlock: Asexuality, Victorian Abstinence and the Art of Ambiguity (Amber Botts) 169
Sherlock and the Case of the Feminist Fans (Charla R. Strosser) 180
#Setlock and the Power of Fandom (Jennifer Wojton) 194
About the Contributors 209
Index 211 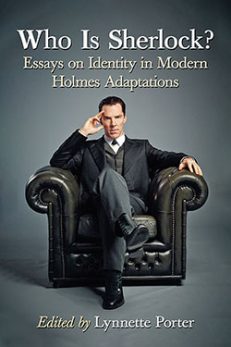