View cart “Where Monsters Walked” has been added to your cart.

This richly illustrated guide to dozens of California filming locations covers four decades of science fiction, fantasy and horror movies, documenting such familiar places as the house used in Psycho and the Bronson Caves of Robot Monster, along with less well known sites from films like Lost Horizon and Them! Arranged alphabetically by movie title—from Amazing Colossal Man to Zotz!—the entries provide many “then” and “now” photos, with directions to the locations.

• “This is the book for fans of old science fiction, fantasy, and horror movies who have wondered about the places where films were made…a labor of love. Recommended”—ARBA

• “Terrific fun and will leave most Monster Kids spellbound for many, many hours”—Midnight Marquee

• “A fun and interesting read”—Discover Hollywood 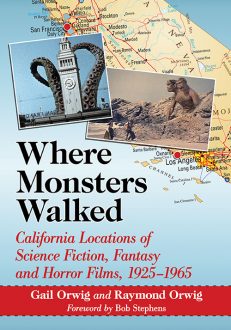 You're viewing: Where Monsters Walked $49.95
Add to cart