When Scotland Was Jewish

The popular image of Scotland is dominated by widely recognized elements of Celtic culture. But a significant non–Celtic influence on Scotland’s history has been largely ignored for centuries? This book argues that much of Scotland’s history and culture from 1100 forward is Jewish. The authors provide evidence that many of the national heroes, villains, rulers, nobles, traders, merchants, bishops, guild members, burgesses, and ministers of Scotland were of Jewish descent, their ancestors originating in France and Spain.
Much of the traditional historical account of Scotland, it is proposed, rests on fundamental interpretive errors, perpetuated in order to affirm Scotland’s identity as a Celtic, Christian society. A more accurate and profound understanding of Scottish history has thus been buried.
The authors’ wide-ranging research includes examination of census records, archaeological artifacts, castle carvings, cemetery inscriptions, religious seals, coinage, burgess and guild member rolls, noble genealogies, family crests, portraiture, and geographic place names.

Elizabeth Caldwell Hirschman is a professor of marketing at Rutgers University in New Brunswick, New Jersey and a professor at the University of Virginia–Wise. She has written widely on genealogy and ethnic identity.
Donald N. Yates is an American genealogist, cultural historian and DNA investigator. He lives in Longmont, Colorado. For more information visit his official site at www.donaldyates.com.

10. The Religions of Scotland: Did Presbyterianism Have Crypto-Jewish Origins?      192 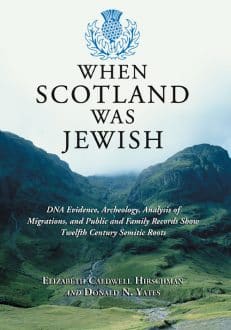 You're viewing: When Scotland Was Jewish $39.95
Add to cart