When the story of banjo superstar Earl Scruggs is told, the rich musical environment that produced him is often ignored. During his lifetime Scruggs spun a creation myth around his playing, convincing many that he was the sole originator of a three-finger, up-picking, banjo style. For the first time, this book tells the full story of the music and musicians of the western Carolinas that influenced Earl Scruggs. Based on more than 15 years of in-depth research, this book includes the story of country music recording pioneers Parker and Woolbright, Fisher Hendley and Martin Melody Boys; rare images of area music makers; and the history and development of fiddlers’ conventions and radio barn dances. Together, these stories are woven into the biographies of Earl’s mentors to reveal the musical atmosphere in which they developed the “three-finger picking” style that so enchanted a young Earl Scruggs.

Musician and writer Bob Carlin is the author of several books. His articles have been published in Journal of Country Music and Bluegrass Unlimited. He lives in Lexington, North Carolina. 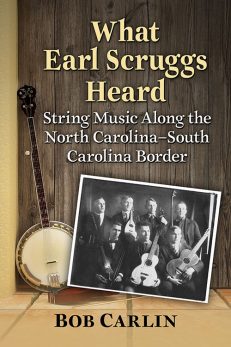 You're viewing: What Earl Scruggs Heard $35.00
Add to cart