We Were the All-American Girls

Here are 42 interviews with women who competed in the All-American Girls Professional Baseball League. Each interview features data about the player, a short summary of her athletic career, and the player’s recollections. A brief history covers the many changes as the league evolved from underhand pitching with a 12-inch circumference ball in 1943 to overhand pitching, adopted in 1948, through the circuit’s final year, 1954, when a regulation baseball was introduced. The interviews range from 1995 to 2012 and reveal details of particular games, highlights of individual careers, the camaraderie of teammates, opponents and fans, and the impact the League made on their lives. Several players recall how the 1992 movie A League of Their Own brought the historic All-American League back to life almost 40 years after the final game was played.

Jim Sargent, a longtime professor of American history, retired as dean of the Social Science Division at Virginia Western Community College in 2010. Before that, he taught on the college and university level for more than 30 years. He lives in Roanoke, Virginia.

Epilogue: From the 1954 Season to the Newsletter, the Reunions, A League of Their Own, and Beyond 297

“The interviews…are informative, providing a wonderful new resource for scholars and casual researchers alike. Even those who have studied the league extensively will find new information contained in the memories and stories of the former players…unique details and anecdotes. The women’s stories, presented in their actual words, offer all readers special insight to their thoughts, feelings, and experiences”—Nine; “fascinating reading for anyone interested in baseball’s history. The best part of the book however is the forty-two interviews with former AAGPBL players. Together, the interviews provide a fantastic history of the league, but each one is a stand-alone piece”—Canadian Baseball Network; “sports history fans who enjoy reading about the All-American Girls Professional Baseball League are in for a treat”—baseball-almanac.com. 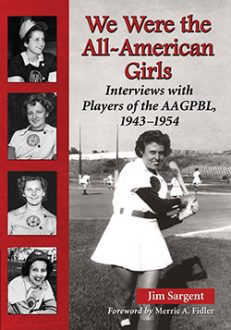 You're viewing: We Were the All-American Girls $35.00
Add to cart