A History of Ancient and Medieval Sweden

The Vikings descended upon Europe at the close of the 8th century, invading the continent’s western seas and river systems, trading, raiding and spreading terror. In the north, they settled Iceland and Greenland and reached North America. In the east, Swedish Varangians established a river road to the Orient. With the collapse of the Viking commercial empire, Sweden and the other Scandinavian countries struggled to survive, their hardships exacerbated by internal strife, foreign domination and the Black Death.
This book details the development of Scandinavia—Sweden in particular—from the end of the Ice Age, through a series of prehistoric cultures, the Bronze and Iron ages, to the Viking period and late Middle Ages. Recent research suggests a Swedish origin of the Goths, who helped dismember the Roman Empire, and evidence of Swedish participation in the western Viking expeditions. Special attention is given to Eastern Europe, where Sweden dominated commerce through the conquest of trade towns and the river systems of Russia.

Gary Dean Peterson is an independent scholar and writer whose published works include magazine articles and two books. He is a retired engineer living in Salt Lake City, Utah.

“One of the greatest strengths of the work is how well it provides a more nuanced and complex history of both the Goths and the Vikings… Peterson has provided a thoroughly researched look at Sweden’s development, from primitive peoples after the Ice Age to a people with an emerging national identity about to become players in post-medieval European politics”—Studies in Medieval & Renaissance Teaching 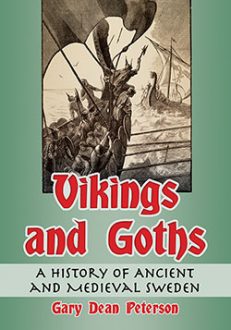